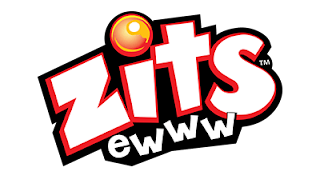 
Kids are born pranksters. My 7 year old has been playing pranks on his older brother for as long as I can remember. First came the whoopie cushion, then stink bombs, fake vomit, slime and poop emoji toys.  Now New York City’s NSI International, Inc. is taking “gross” to a whole new level. Introducing ZitsTM (EWWW!) pop n’ play pimples. Just press them on, squeeze ‘em, and gross out everyone! Zits is loads of fun for kids and pretty realistic. When they first arrived at our doorstep my youngest immediately put some on his face, went to the bathroom mirror and yelled for his older brother to come in. He soon as he sees him walk through the door he starts "busting" his zits and toy puss goes everywhere. The oldest is running,yelling "Ewwww, your gross". My husband and I got quite a kick out of it. It's a great gag gift or even toy for an older child. My 11 year old has gotten  hard to buy for. He doesn't play with the same toys other kids his age enjoy. The new Zits toy is something my oldest considers an age appropriate toy for himself. You can actually bust Zits and a realistic "puss" comes out of them; super fun to hear my boys tell it!