It's a Dynamite Minecraft Party

How can it be that my youngest baby just celebrated his 6th birthday? It seems that the days are passing by faster and faster. Although I dread how fast its happening, I always look forward to planning their birthday parties. The theme this year was Minecraft. Thankfully, it didn't take alot of time agreeing on a theme. He's been obsessed with everything Minecraft for a good year now so I pretty much new this is what we would be going with. As far as plates, table covers, cups and napkins, those things where incredibly hard top find. Unless you want to pay an arm and leg on Etsy. I enjoy making stuff so I decided to save my money and come up with something. 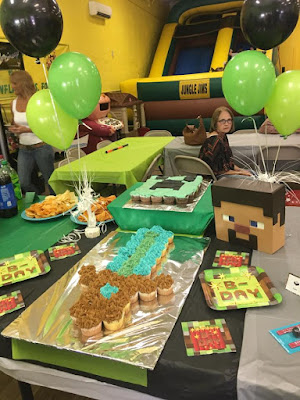 The party venue ended up having a couple plates and napkins left over from a previous party that they let me use for decor. Ashton had gotten a Minecraft Steve costume for his actual birthday and it fit in perfectly with the decorations. We ended up getting 2 cupcake cakes made for the special day. The creeper and Sword. This was out first year doing cupcake cakes but it was so much easier. 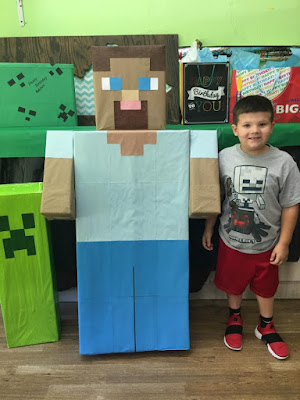 One of my favorite things about the party was our big Steve and Creeper figures. Now, sadly I can;t take credit for Steve. My cousin had actually made him after getting the idea from Pinterest. Her son ended up changing his party theme and she let me have him. By that time he had been stored in a building and was pretty tore up. My mother in law was able to savage him. She just got some new paper and completely re'did him. His body was made from a big box, his head from a pampers box and the arms from a 12 pack of soda box. And construction paper was used for the rest. For the creeper I actually used an old Oriental Trading box and wrapped it with green wrapping paper. A sharpie for the face. 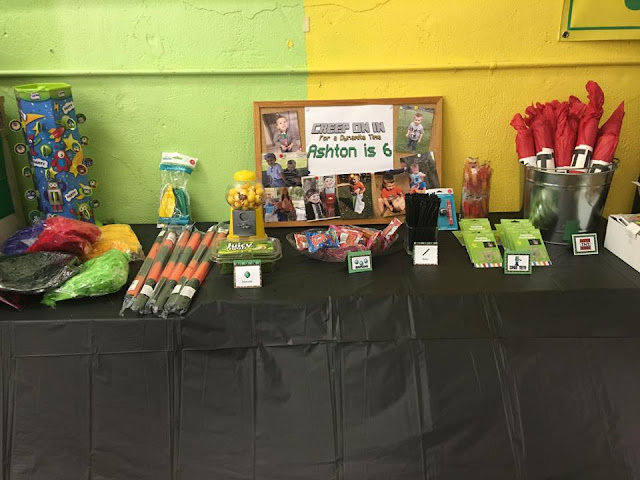 No party is complete without a party favor/candy table. For the centerpiece of the table I used a bulletin board to put some pictures of Ashton through the years, with a sign that said "Creep On In For A Dynamite Time, Ashton is 6". We had feather boa's, light up batons and flashing teeth (you can read more about those here). I used some free Minecrfat templates that I printed from online. We had sticks (black pixi sticks) diamonds (ring pops) emeralds (green twizzlers) and some scary gummy fingers. All of the candy (and favors) came from Oriental Trading. Another thing we did was use the "Brewing Station" template/card to sit in front of our drinks (soda/juice/water) 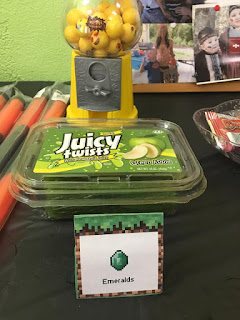 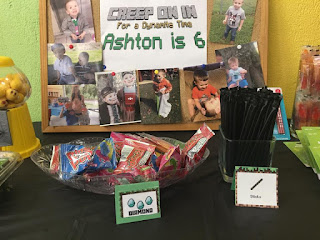 We also had sticks of TNT Dynamite for each kids. They where made using paper towel rolls and red tissue paper. Each stick was filled with candy, glow rings, whistles and some other small novelty items. 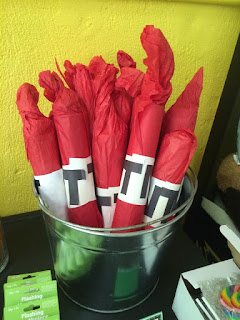 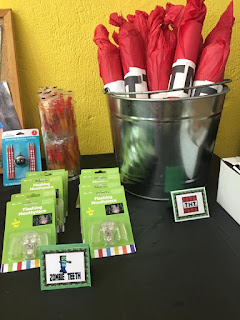 For table covers we used a mixture of solid colors. Black, dark green and light green. For the plates, cups and napkins I went with a bright green and used a sharpie to draw a creeper face on the top plates and napkins and a few cups. These where mainly for decor purposes as I assumed most people wouldn't want to eat sharpie HaHa. 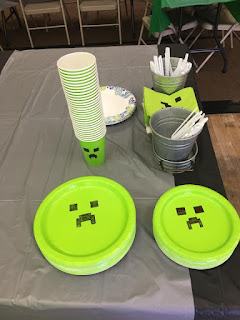 Check out some of our past parties like Everything is Awesome Lego Party, Calling All Super Heroes, Minion Party, Carnival Theme Party, Super Hero Party

Visit Oriental Trading to purchase the Halloween candy we used.