Who's The Dude Game Review 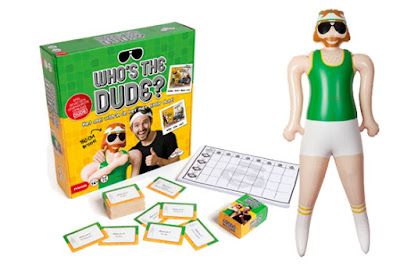 Who's The Dude is a twist on a classic, family favorite game. Charades! Charades is a game as old as time itself. From Identity Games comes a fresh take on the old time favorite. A game called Who's The dude.

The "Dude" in the game is everyone's best friend. Players act out charades with this inflatable doll. Its best for players 16 years old and up. It definitely makes for a hilarious party game. This game challenges players to act out movie scenes, professions, love ballads and other ridiculous activities using "The Dude". The game comes with the inflatable dude (ofcourse), charade cards, score sheets and a repair patch (incase anything happens to your dude from him acting all crazy). 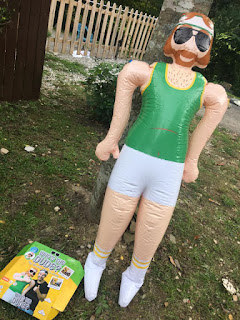 The dude itself is 4 feet tall 11 inches. Which makes him an even better party pal. He wears a green muscle tee, crew-length socks, short shorts, aviators and a sweatband. In my opinion Dude looks like every other guy on my favorite reality series Jersey Shore- GTL anyone?
My husband and I don't get out much so we where left to try the game out ourselves. First things first when it comes to playing. You have to inflate your dude. And you can name him if you'd like. We called our dude "Pauly", very fitting isn't it?  There are 110 charade cards with four actions on each card, which gives you tons of play without having to repeat often. You can keep track using the score sheet. We didn't keep score since it was just the two of us. We each had 45 seconds to act out as many charades as we could using the dude. Let me tell ya, this was a hard task. We literally couldn't stop laughing long enough. 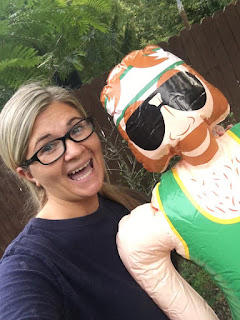 I'll be completely honest. This was some of the most fun we've had in a long time. It was great being able to sit down and laugh together. Pauly the dude made it so much more fun. Using this inflatable doll to act out the activities was a treat itself. We could hardly speak for laughing. Pick up "Who's The Dude" from Target for your next game night.